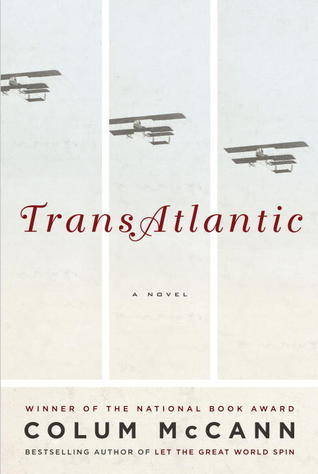 Indisponible
Newfoundland, 1919. Two aviators—Jack Alcock and Arthur Brown—set course for Ireland as they attempt the first nonstop flight across the Atlantic Ocean, placing their trust in a modified bomber to heal the wounds of the Great War.

Dublin, 1845 and ’46. On an international lecture tour in support of his subversive autobiography, Frederick Douglass finds the Irish people sympathetic to the abolitionist cause—despite the fact that, as famine ravages the countryside, the poor suffer from hardships that are astonishing even to an American slave.

New York, 1998. Leaving behind a young wife and newborn child, Senator George Mitchell departs for Belfast, where it has fallen to him, the son of an Irish-American father and a Lebanese mother, to shepherd Northern Ireland’s notoriously bitter and volatile peace talks to an uncertain conclusion.

These three iconic crossings are connected by a series of remarkable women whose personal stories are caught up in the swells of history. Beginning with Irish housemaid Lily Duggan, who crosses paths with Frederick Douglass, the novel follows her daughter and granddaughter, Emily and Lottie, and culminates in the present-day story of Hannah Carson, in whom all the hopes and failures of previous generations live on. From the loughs of Ireland to the flatlands of Missouri and the windswept coast of Newfoundland, their journeys mirror the progress and shape of history. They each learn that even the most unassuming moments of grace have a way of rippling through time, space, and memory.

The most mature work yet from an incomparable storyteller, TransAtlantic is a profound meditation on identity and history in a wide world that grows somehow smaller and more wondrous with each passing year.
S'identifier pour envoyer des commentaires.